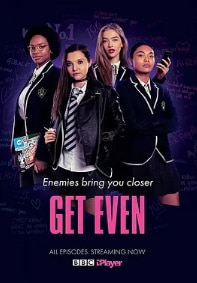 On the surface Kitty, Margot, Bree and Olivia appear to have nothing in common but there’s one passion which unites them - to expose injustice.They form their own secret society, DGM - they Don’t Get Mad, they Get Even - playing anonymous pranks to expose bullies.But when their latest target, Ronny, ends up dead with a DGM card in his hands, the girls realise that they’re not as anonymous as they thought - someone now wants revenge.Bannerman School might look beautiful from the outside, but there’s something corrupt under the surface. Competition is encouraged to the point of cruelty, bullying is common and accepted by the establishment; the way the teachers see it, if you can’t take it you’re not a good fit for the school.The four girls set out to deliver justice for those who have been wronged at the school, but the tables are turned against them.DGM find themselves framed for a crime they didn’t commit. Their only option is to discover who the true murderer is, why they were framed, and clear their name once and for all.It’s also a time of first love, exams and identity crisis and for Kitty, Margot, Bree and Olivia. The themes of love and relationships, trust, true friendship, empowerment, teen identity and independence weave addictively throughout the series. Even when they are focused on grades or guys, jeopardy is never far away.Adapted by Holly Phillips from the book by Gretchen McNeil, Get Even is a ten part series and is a co-production between BBC Children’s In-House Productions and Boat Rocker Studios. Executive Producer for Children’s In House Productions is Lucy Martin with Chapman Maddox and Bob Higgins Executive Producers for Boat Rocker.Mia McKenna-Bruce plays Bree, Kim Adis is Kitty, Bethany Antonia is Margot and Jessica Alexander is Olivia. Razan Nassar plays Amber, Chris J Gordon is Donte, Joe Flynn is Ronny, Joe Ashman is Rex, Isaac Rouse is John, Kit Clarke is Logan, Danny Griffin is Shane, Dylan Brady is Ed, Emily Carey is Mika, Jake Dunn is Christopher. Jack Derges is Coach Creed, Elaine Tan is Coach Evans, Shannon Murray is Mrs Baggott, Charlie Anson is Mr Harrington and Natasha Atherton is Detective Misra.The full series of Get Even will be available on BBC iPlayer from Saturday 15 February.